The Secrets of Sacred Geometry

The Secrets of Sacred Geometry 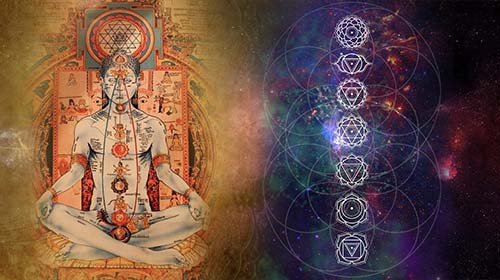 Is this anything you’ve heard before? “I’m loving meditation, and the breath awareness and mantra I’m practicing are beneficial, but I’m a visual person.” Is there a visual framework I might include into my practice to assist me remain focused?”

This is not an uncommon question, but it might be difficult to answer. If we were stitching together practices from several traditions, we could use pictures of all kinds: thangkas from Tibetan Buddhism, ancient Christian icons, chakra paintings, representations of favorite deities, or even candles. We may imagine a calm beach, a wooded glade, or a Himalayan hideaway. These are the kinds of photos that we use to adorn our houses and meditation spaces. Bringing these pictures into meditation at random, on the other hand, is ineffective and may even be disturbing.

Fortunately, the discipline of yantra is a sister science to mantra that provides a visual grounding. Yantras are geometric diagrams that frequently consist of a centered point surrounded by symbolic circles, triangles, and squares. These visuals may help you improve your meditative concentration and focus.

It all Starts with a Single point Let’s start with a point picture. A single point may be a gateway leading from the invisible to the visible. Assume you are staring down a train track toward the horizon. At first, all you can see is the convergence of the rails themselves. Then, in the distance, you notice a spot growing larger and larger. Soon, you spot the shape of a locomotive and prepare to leap out of the path. An item has arisen from what appears to be empty space, gradually becoming into a train.

According to yogic metaphysics, all visible objects have progressed from unmanifested to manifested phases of existence. Babies, structures, and creative ideas emerge from the invisible and take physical form. Even consciousness arises from the unseen, and its expression results in every one of us having a sense of different awareness.

Sages tell us that throughout our contemplative journey from individual awareness to pure consciousness, we pass through this pivotal place. The topic appears in Patanjali’s famous yoga text, the Yoga Sutras, where he explains meditation as a process in which we learn to settle our consciousness on a single point. As meditation progresses, this focal point serves as a pivot, directing the flow of attention inward.

Use this image to help you focus your attention when practicing one-pointedness. Consider a pond with a surface that is so motionless that there isn’t even a ripple in it. If a bubble of air floats up from the bottom and breaks the surface of the water, it will form a circular pattern of little waves that will softly spread out throughout the entire pond. This pond represents your thoughts. The surface of your mind gets increasingly still while you meditate.

Imagine yourself resting at the precise point where the object of your focus, your mantra, first enters into awareness during mantra meditation. In this scenario, the mantra is the bubble rising to the surface of awareness. Your focus is on the sound of the mantra when it first reaches the surface of your conscious mind.

The sound’s waves travel through your head, but you’re not paying attention to their motions or the comings and goings of other ideas. Simply do nothing in terms of mental processes other than the sound of the mantra. Once you’ve formed your mantra using the visual picture, let it go and simply rest in the mantra, in the spot in the center of your mind. The sound of the mantra will gradually fill and connect the space of your conscious mind.

A Sluice of Light

The outcome of extending a point in one dimension is an indefinitely long straight line. Consider the following narrative from the Puranas, early scriptures of Indian mythology, to put this in a yogic perspective. They say that once,
before the gods, a bright vertical shaft of light arose. This beam of light was so powerful that it made even the natural forces of wind and fire powerless. Amazed, two deities set out right away to locate its beginning and finish, but a quest that lasted countless eons proved futile. The shaft of light revealed itself as the manifestation of pure awareness only when the gods were humbled by its unfathomable immensity of pure consciousness.

There is a link between this narrative and meditation practice. The vertical shaft of light represents the spinal axis in the human body. None of the lesser functions of human physiology can work without the existence of this column of life energy. The body is oriented along the spinal axis during meditation. This contributes to the process of developing a sophisticated sense of inner awareness. 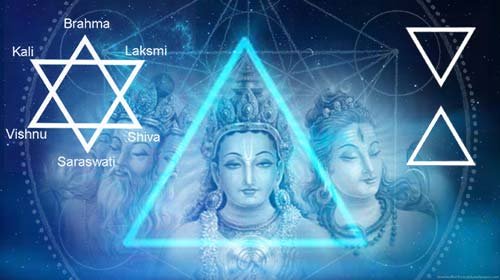 Meanwhile, the yantra system represents the archetypal number three as a triangle. The triangle’s three points represent any number of trinities, including beginning, middle, and end; observer, object, and means of knowing; Brahma, Vishnu, and Shiva; the past, present, and future; the earth, sky, and heaven; or the doer, action, and ways of executing action.

The three gunas, the three characteristics or “strands” from which the cosmos is woven and which pervade every element of apparent reality are among the most essential of the yogic trinities. They are known by the Sanskrit titles sattva (light), rajas (motion), and tamas (darkness), and they interplay with one another to produce infinite combinations of matter and consciousness. The human personality, for example, is made up of a body (the tamasic element), inner energies (the rajasic element), and a mind (the sattvic element), while temporary mental states can be tamasic (slovenly, lazy), rajasic (full of desire and restlessness), or sattvic (calm and serene) (poised, tranquil, balanced). So it is with everything else.

Shakti is the force of creation whose nature incorporates these three aspects (power, energy). Shiva is the name of her consort, pure consciousness (auspicious, benevolent). But, like fire and light, Shiva and Shakti are intrinsically one. Their connection is often represented as a point (Shiva) inside a triangle (Shakti). The confluence of these two principles pervades all of creation in the form of profound and enduring pleasure.

Triangles may be oriented either upwards or downwards. Those pointing up represent increased vitality and mobility in the human body. They reflect ambition and hard work. They also symbolize fire because they seem like climbing flames. Triangles pointing downward symbolize heavenly favor. They also symbolize soma, or nourishment for life’s flames. These triangles merge at the heart core to produce two interlaced triangles, the upward-facing triangle associated with Shiva and the downward-pointing triangle associated with Shakti (filled with benevolent grace).

The geometry of the Body 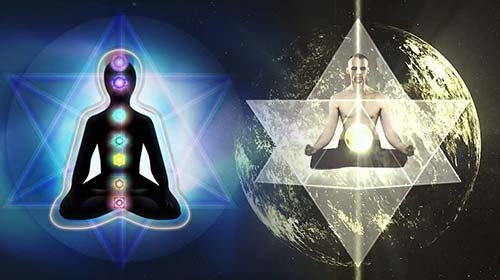 You may notice triangle forms in your own body when you sit for meditation in any of the cross-legged postures. A triangular base is formed by the two knees and the base of the spine, and the whole body forms an upward-pointing triangle as well. A more detailed examination of the body’s upward triangular forms reveals it to be a tetrahedron, a four-sided geometric solid.

When the body is in a meditative position, these and other yantric images may be discovered. Thus, a human being is the incarnation of a yantra. When you sit in a cross-legged meditation stance, you are the picture that the yantra graphically depicts.

How might these yantric visuals be used in meditation? Here’s a simple yet lovely meditation technique in which you use your breath, a visual picture (a thread of light), and a mantra (so ‘ham) to journey up and down the center axis of your body:

Close your eyes and sit for meditation. Arrange your posture (even if you’re not sitting cross-legged) such that your spine seems to be a center axis, balanced from bottom to top. Consider your body to be an upward-facing tetrahedron. Allow the interior of that form to softly dance with the fires of awareness and vitality. Relax your body and let your breath to cleanse and feed you as it goes in and out. When you’re ready, focus your attention on the breath in your nostrils. Feel the breath for a few moments. Once your concentration is firm on the breath, add the mantra so ‘ham, inhaling so and expelling ham (pronounced “hum”).

Bring your attention to the middle of your brows. Exhale with the sound ham down to the base of the spine, and inhale with the sound so up to the crown of the head. Breathe as though you’re moving up and down the spinal axis, which you see as a threadlike shaft of light. Continue for a few minutes, modifying your posture so that your spine can support itself easily.

Take your focus to the Ajna chakra, the brow center, when you are ready. Rest your concentration in the sound of the mantra so ‘ham, gradually focusing it on a single point, the place where the sound first appears in your mind. Allow the mantra’s sound to fill the space in your mind as you lay your focus on it.

Sit for as long as you want, gradually transcending visual impressions and settling into one-pointed awareness of the mantra’s sound. 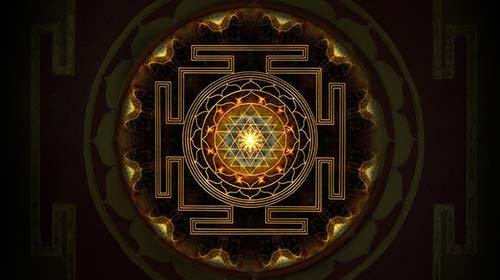 The Shri Yantra portrays the development of the multiverse as a consequence of Aadi Paraa Shakti’s innate Divine Will. The four upward-pointing isosceles triangles represent Brahman, the Goddess’s masculine incarnation, while the five downward-pointing triangles represent Jagat jannani, the Goddess’s feminine embodiment. On the physical plane, the 12 and 15 sides of the four upward and five descending triangles correspond to the 12 sidereal zodiac signs of the Sun and the 15 ‘nityas’ phase-signs of the Moon.

Also known as the nav chakra, is made up of nine concentric levels that radiate forth from the bindu. In Sanskrit, “nau” or “nava” denotes “nine.” Each level is associated with a mudra, a yogini, and a distinct form of the goddess Tripura Sundari, as well as her mantra. The Devi Khadgamala Mantra describes the different goddesses who reside in the Shri Yantra’s nine levels.

These levels, from outermost to innermost, are as follows:

No products in the cart.

Dr. A. Kumaran is the founder of Malaysia Sri Bala Tripurasundari Peedam residing in Sri Saradha Devi Ashram Rawang. The young spiritualist Professionak is a Grand Reiki Master, trained in the field of Tantrik, Metaphysics, Hipnotis, Angelic healing and specialized in DNA Healing through Universal Energy.

Master, is also trained in the Sri Vidya Tantra and the practice of Dasamahavidya Sadhana, has been providing deeksha to many on the Sri Bala Tripurasundari Sadhana, Mantra Yogham, Reiki Healing and many more. Master’s research on the Universe and its magnificent energy has started since the tender age of 14. Now after 10 years of successful research, Master has begun to conduct Past Life Karma Healing sessions through Universal Energy for overall wellbeing of an individual achieved by reducing the impact of our past life karmas. This clear obstacles from our path towards success in achieving both materialistic wealth as well as attaining Moksha.